Review of Sparks', Kloss', and Kish's THE DESERT PLACES 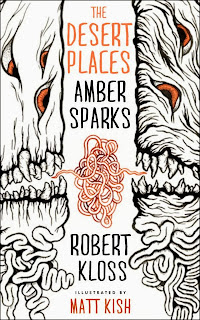 The Desert Places, the collaborative effort of writers Amber Sparks and Robert Kloss and illustrator Matt Kish, is a sinister, beautiful thing. It is a tour of the past, present, and future of Evil—a tour guided by the monster itself. It begins at the Creation and moves forward through time, pausing at different moments in our, humanity’s, rise and fall. Sparks and Kloss do a fine job of making their character equally terrifying and fascinating, exposing our fears while simultaneously drawing us closer. In the midst of an Inquisition scene: “you told them you had been witness to the birth of the universe and known the stars as they flickered into light and you said, ‘There was no voice in the void, no voice but mine.’”
The book is both ambitious and accessible. The writing is vivid, and the chapters, which take on different stylistic formats and points-of-view throughout the book, are entertaining as well as disturbing. Particularly captivating is the view of the future, the fall of humanity, and the world after it. The stories told in each chapter blend the mythic with the deeply human. That is perhaps the book’s strongest aspect; its exploration of the dependent relationship between evil and humanity.
Sparks and Kloss have blended their writing seamlessly. Matt Kish’s illustrations are vibrant, and they tie the book together into an object that is as arresting to look at as it is to read. Kish’s particular style, which leans toward cartoonish, is a particularly effective counterpoint to the heavy, Biblical nature of the text.
It is always exciting to read something that manages to feel new in a world where everything has been done. The Desert Places takes some of the oldest questions and fears that have embedded themselves in literature, rips them apart with jagged teeth, and lays them out in front of us in new configurations, still pulsing. (October 2013)