Review of Robert Krut's THIS IS THE OCEAN 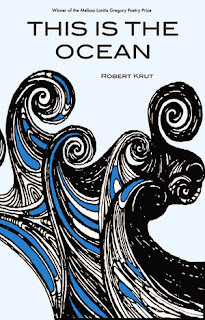 This is the Ocean

Something awful has happened.  Or is going to happen.  Or maybe it was just overheard.  Maybe it wasn’t awful – maybe it was beautiful.  A dream?  In any case, Robert Krut seems to be the only one left alive to tell it.  I wouldn’t necessarily classify Krut’s second poetry collection, This is the Ocean, as post-apocalyptic, but it is definitely post-something.  He’s not writing about our world, at least not a world I recognize.   “Everyone’s losing their shit all around me/ it seems,” he says.  Judging by the semi-grotesque reality that his poems inhabit, I can understand why.

Krut’s verse is loose and fluid, sometimes to the point of feeling shaggy, each line just long enough to capture the picture in his mind and reproduce it effectively on the page.  The mental image seems to be where most of his poems begin. His effort lies in accurately transmitting that image to the reader, so that we may see what he sees.

What he sees is at turns wonderful and horrible.  His physical world is constantly transmogrifying mundane objects into human body parts, or vice versa: fingers become comets, arms become roman candles launching toward the moon.  Krut is at his best when he finds surprising yet perfectly precise combinations, such as the charming simile of driftwood “looking like the folded hands/ of the oldest surf rat in all California”.

Though the world he describes is totally his own, there are occasions when his vision becomes a little too brooding.  Rather than insightful and original, describing skylines as broken teeth and tree branches as “night’s veins” sound childishly macabre, like lines we would find in a goth teenager’s notebook.  I prefer Krut when his focus shifts from light body-horror to more fanciful observations, like seeing a man’s arms “as fat pythons that drop from his torso,/ heavy snakes that just lie there, occasionally/ lifting their heads to stare us down.”

If this poetry exists in a state of post-something, then it leaves us with a question: what remains?  One of Krut’s continuing themes is the ocean, the way it rises, rinses the world, drowns us, and dissolves us.  If the world were scraped clean in a flood of biblical proportions, what would be left?  Krut’s ruminations on legacy are apparent through his work, even if they are never fully explained.  Fingerprints are a repeated motif. They are one way a person can put their imprint on the world that may survive when they are gone - “His fingerprints mark/ the universe’s inside”.  Here the book’s jacket design is worthy of mention, as it cleverly links two of Krut’s main preoccupations: the ocean’s blue-black waves illustrated in the same whorls and arches that make up a fingerprint.

Like a fingerprint, the best image-based poetry leaves a dent on the backs of the reader’s eyeballs.  Krut accomplishes this with his varied yet consistently intelligent verse.  Still, his work would benefit from some stricter parameters, forcing him to focus as much on the words themselves as the pictures he is trying to create.  As it is, the visual lingers after the poem is complete, but the passage often fades.  Campus Before Sunrise, The Sun and the Octopus, and the fun little experiment of 39 Poems Left in the House when Henry Walked Out and Disappeared are some of the standout pieces.

Another of Krut’s recurring nouns is ink; ink collected in bottles, dissolving in the water, an ink-black cloud, or writing on a page.  “I have come from the bottom of the ocean,” the book’s final poem ends, “and I am here to tell you about it.”  A writer’s legacy is their work.  Perhaps ink is to the poet what a fingerprint is to a human, some sort of evidence - no matter how slight - that this place has been touched.  (October 2013)

Purchase This is the Ocean HERE.