Review of Matthew Savoca's I DON'T KNOW I SAID 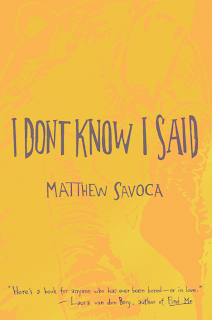 I DON’T KNOW I SAID

I Don’t Know I Said is a short novel in a fairly identifiable form: something happens that shakes a couple’s world and now the couple must determine if they want to stay in that world or move on.

It all begins when Carolina receives monetary compensation for a car accident, and she and Arthur find themselves with the unusual luxury to put life on hold. Without the need to work, they travel. They visit family. They have sex. They have more sex. They watch television. But all the while there’s a disquieting undercurrent to all that they do, as the luxury to live aimlessly only forces them to find direction again—both in their individual lives and in their relationship.

The novel is a quick read that at times feels unnecessarily quickened. But the pervasive and seemingly humdrum dialogue between Arthur and Carolina does more than just advance the characters in space and time.

“‘Do you think I should cut my hair?’ Carolina said.
‘I don’t know. If you want to, yeah.’
‘I was thinking about cutting it short.’
‘You should cut it weird like with some strands still very long but the majority much shorter.’
‘Really?’
‘That would be good,’ I said.
‘I don’t know.’
‘You should do it yourself. In the mirror. I will hold another mirror behind you so you can see everything.’
‘Or you could do it.’
‘No, it’s better to cut your hair yourself.’
‘What? Why?’
‘I don’t know. It just is.’

Exchanges such as this are typical between Arthur and Carolina, and in another author’s hands may wind up feeling only like filler. But Savoca smartly keeps his characters talking in this stark and playful manner throughout, allowing the reader to fall easily into their conversations as if a third party. Similarly, there’s a flatness to Arthur’s descriptive language: “We touched each other and turned the television off and had sex. In the morning when we woke up, we had sex again and then we ate breakfast.” But it’s only against the banality of the everyday that the large questions central to the novel about purpose, motivation, and existence fully resonate.

Savoca gives voice to a recognizable cultural apathy in I Don’t Know I Said and asks a question we’ve all asked—“Now what?” But what sets his question apart is the expanse of time he allows his characters to lack motivation. Much the opposite of our often self-imposed fast-paced world, no one’s in this for a quick fix, and no one’s in a hurry. This novel will get into the heads of everyone who’s ever not known what comes next—as it reminds us all that it’s OK sometimes if we don’t have the answer. (April 2013)