Review of THE &NOW AWARDS 2, edited by Davis Schneiderman 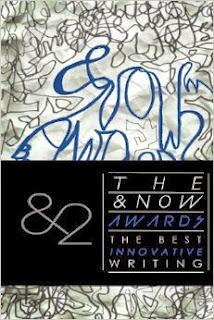 The &NOW festival is a biennale art and literature gathering which was first held in 2004. The &NOW Awards are an anthology that (as stated in the introduction) is not related to the &NOW festival, except for when it is. This second volume contains material published or presented between 2009 and 2011.

The anthology is thick, representing around eighty writers, two collectives and one writers community that is actually one person. The central organizing aspect of this anthology is at once a great, beautiful, powerful thing and surely financially risky: rather than gathering writing around a theme, or a style, or era (which would at least ensure a mildly enjoyable experience for a large audience) the collection gets together all the risky, weird stuff that will not make it into many (read: any) mainstream venues and gloms it together one after the other. This is sort of unfortunate as, if one were to pick this up in a bookstore and crack it open they would most likely (based simply off how widely the writing varies) come across something that does not resonate with them, and may find something so far from their tastes that it turns them off from the rest of the collection entirely.

That said, there is just so much here, and it covers such a mind bogglingly diverse clump of styles and approaches and tactics from fairly straight forward prose (like Roxane Gay’s I'm Going to Cook Our Dinner in My Easy Bake Oven And You're Going to Like It or Matt Bell’s Justina, Justine, Justise) to language poetry (Joyelle Mcsweeny’s King Prion) to conceptual pieces presented as explanations of the process used (the Black Took Collective’s ‘Accretion: Buffalo Performance’) and visual art pieces made exclusively from letters (Nico Vassilakis’ STARINGS and an excerpt from A. J. Patrick Liszkiewicz’s Alphabet Man) that even most mildly adventurous readers will find at least a dozen pieces that appeal to their taste and probably a solid handful that will blow them away, and will probably find them where they least expect it.

This potential weakness then is also what makes this collection pretty magical: you do not have to read the whole thing (and most of the pieces are short enough that you will not lose that much time reading them all anyways) but what you - almost certainly - stand to gain is an introduction to writing which you would have otherwise never sought out on your own, and would have never found.

Many of these pieces rely heavily on their context. That is, read on its own a piece might seem boring or hopelessly obtuse, but with a little searching into the efforts and process behind a piece the work will liven up: gaps will be filled in, edges sharpened, meaning constructed. A few pieces are prefaced with a short explanation by the author, translator or editor. Some of these ‘Abouts’ are art pieces in themselves with gymnastic language and theoretical leaps, others are fairly straightforward and add substantially to a piece which might otherwise seem like a throw away. I had qualms with a few of these as they unfortunately took the magic away from one or two pieces by explaining a trick which could have better been explained after the piece had been read. In future editions these explanations might be more effective presented after the piece. This, of course, is a minor issue.

Halfway through the book the text flips. In the print version this provides the cool effect that the reader may begin at either end of the book and when the middle is reached, the reader has to flip the book upside down and start from the other side. Unfortunately in the e-format the flip is a little awkward and distracting as the reader has to scan the pages from top the bottom then scroll up to reach the next page. Again, a minor issue.

Since this review is already too long I have compiled a very short list of some of the pieces that stuck out to me. I do not have a lot of good reasons why these spoke to me and others did not. A lot of pieces turned me off almost immediately and only a few left me without a strong opinion. Rather than a sign of bad writing I took this as an indicator that most of the pieces in the anthology are at least powerful writing, much of which just did not fit my aesthetic. If anything I find it interesting how such cerebral and planned out literature as those presented here can evoke these sorts of unexplainable gut reactions. My tastes skewed pretty hard toward the more traditional, linear prose works. Your mileage will certainly vary.

An excerpt from Arno Bertina’s ‘Anima Motrix’, translated from French by Anne-Laure Tissut, is a series of apparently disconnected scenes: domestic ennui, aimless wandering, and observations of life in a solid stream of consciousness style. Bertina (through Tissaut) demonstrates a really nice style that came off to me as lively and bubbling while moving with a constrained force.

The poems from Jose Perez Beduya’s Throng were one example of a piece where the explanatory preface (here just effusive praise of Throng) was mostly unnecessary. Beduya has some very good poems here and informing the reader of this beforehand seems strange and unnecessary.

Joyelle Mcsweeny’s King Prion was one example where I was blindsided. Language poetry rarely causes a rise in me but each of her pieces in the series is bursting with life, a cascade of imaginative tonal links and mind bending imagery.

Of the conceptual pieces, Nick Montfort’s Letterformed Terrain, a (very short) perl script which creates a random string of characters and spaces which stream by as a moving landscape, came off as both an interesting concept and aesthetically pleasing.

So here is the Whitman’s sample of out-there literature. Take a bite out of each piece, throw away the cremes, jellies and chocolate covered nuts, then go out and buy two pounds of the caramels. Cuz the caramels are worth it. (May 2013)