Review of SPARK: A CREATIVE ANTHOLOGY, VOLUME I 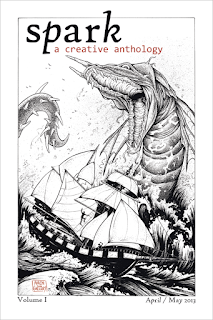 Spark: A Creative Anthology, Volume I
Ed. Brian Lewis. Empire & Great Jones Little Press, $14.99 (242p) ISBN: 978-0988807211
Spark is doing a wild amount of things at once. It lies somewhere between traditional anthology and literary magazine. It houses stories from the very brief to the very long, poetry, and illustrations created specifically to accompany the text. The works occupy every genre from metered poetry to free verse, from literary fiction to suspense, sci-fi, and steampunk. Its contributors are writers of all backgrounds, from published novelists to high school students. Second and third volumes are already planned and in their beginning stages. Brian Lewis has put together an ambitious project meant to step outside boundaries.

Spark’s greatest strength is that it showcases writers who are primarily new and emerging. A few are established and widely published, but most are writers who are just beginning their publishing careers. A couple are high school students. The writing is a little less restrained and polished than what might be found in an anthology packed with “bigger names,” but that gives the collection an electric feeling, appropriate, given the title. There is clear energy and enthusiasm in the work. One contributor’s bio begins: “Matt Lancaster is twenty years old and neck deep in the world.” That statement points toward Spark’s function—to put you neck-deep in a world of fresh writing.

As a first installment, Spark is a little uneven at points. It is weighted in favor of fiction over poetry. The poems that are included are brief and on the whole not as strong as their prose counterparts. The anthology also slants toward genre fiction, which can make the pieces that aren’t feel a little out of place. And, as a side effect of the pool of contributors, the quality is also varied, with some pieces coming off trite or hastily wrapped up.

The book has its standouts, of course. “By the Gun” by Alexis A. Hunter is a western that is interesting because it is a first installment in a serial to be continued in the subsequent Spark publications. The final piece, “One Cog Short of Paradise” by Kaitlin Branch, is the “origin story” to be series of forthcoming “Steampunk adventure novels.” Peter Wood’s “The Fig Tree” blends science fiction and theological speculation. “Forget Me Not” by Svetlana Kortchik is a quiet suspense story with a sharp twist of an ending. Margaret Dilloway’s “Ever Since I’ve Seen Your Face,” a short story about a woman in Hawaii who befriends a young homeless man because he reminds her of a past love, is one of the strongest pieces in the book. She binds together contrasting descriptions of the island—from the rundown neighborhoods to the stunning beaches—with the emotional peaks and dips experienced by her character.

Given the many spaces it inhabits, it is likely that the forthcoming Spark volumes will be even more rich and varied than the original. (April 2013)