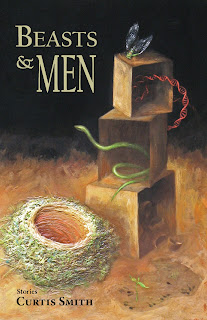 Curtis Smith. Press 53, $14.95 trade paperback (160p) ISBN: 978-1-935708-75-9
When I finished reading Beasts and Men, I flipped through the pages rereading passages and sentences I had underlined, and notes I had made in the margins. I underlined at least one sentence in each story, and in most I underlined several. I thought about writing down the sentences here or maybe transcribing my notes for this review, but I decided against it because I don't want to give that much away.

Curtis Smith tells these stories with no detail wasted. Each story is human, purposeful, and masterful. Smith's compassion and diversity of understanding the human experience is comparable to how well William Gibson understands Tokyo.
From The Pact, a story about assisted suicide:

“She remembered him on a snowy day, wool cap he used to wear. 'Thank you,' he said before the plastic eclipsed his mouth. The bag rose and fell. Its awful rustle mesmerizing.”

To the story, The Tycoon, (which would be comfortable as a P. T. Anderson film):

“Despondent over the cotton that grew no higher than his shin, the boy's father put a shotgun to his heart and pulled the trigger. The chunks of spine the sheriff pulled from the shanty wall looked like opossum teeth.”

His attention to detail reminds me of Eugene Marten, and his smoky voice hearkens to Raymond Chandler.
I found it odd that the cover artist Suzanne Stryk has a page-long biography in the back of the book after Smith's much shorter biography a page before. Her piece, Collecting the Wild III, was used by permission—hence not created specifically for the book—and that's the only thing I found weak here: a cover that doesn't do the text justice.
In these stories, Smith always delivers a rousing last paragraph and a knockout last sentence that leads the reader right into the next piece until the very last page. (February 2013)