Review of Ana Božičević's RISE IN THE FALL 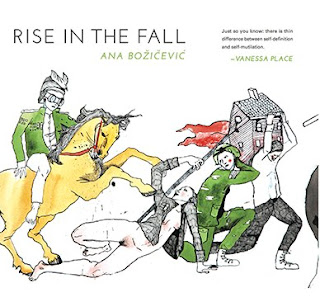 RISE IN THE FALL

For poets writing in a time of war, beauty is a problem. You’re supposed to want it and you’re not supposed to want it. Ana Bozicevic’s second poetry collection, Rise in the Fall, starts with beauty and follows it quickly with blame, but finds that neither is a place where her poems can fully rest, “like the time when to read and write / was an offense punishable by death / and taking it or leaving it was death, // and so we did.”

Whenever the poet tries to write about war, something less than war interrupts—“I know there’s war all around me, / and inside there’s war: who died, who cheated / when will she look at me like that ...” If the poet tries to write beautifully—of love, contentment, the sweetness of life, even the dignity of grief—she finds that she has to refuse: “When called on to say: / ‘A bomb’s like a box of stars,’ I couldn’t do / it.” She piles up satisfaction and contentment with one hand and dismantles them with the other, squawks or hisses when her line begins to find a song. Many of the poems in this collection have the word “poem” in the title, are about poems or poets that are fake or fail, and Rise in the Fall is illustrated by Bianca Stone with drawings of women reaching, clutching, grasping in waves; they seem, like the poems, ready to tear at themselves and us, unable to find a way up and out.

But as they continue to reach—and this is a book with a definite direction of travel—a change begins to come. It’s not the poems’ shape or impetus: they still look and feel outflung, lines of halt and lines of effort. It’s not their sound: they still rock their own cadences with rushes and interrupted lulls. But instead of beauty distracting the poems from war and war distracting the poems from beauty, the images Božičević draws up and flings out show that war and beauty are both impeding something else:

… So much of my life
I’ve held out against the forces of green. If
I dive in, I can’t stop—
…
So you mean you’d sooner be a relic than
exist in everything. Yes. And that’s why you’re not
a poet? Yes, that’s what I mean.
But one thing is still unresolved. What’s that?
The longing.

What does the poem long for? What does it want from her, or from us? Maybe it’s not the poem that wants, but the other world, the one waiting in this world: “I put this arrow in my body / not to accentuate / the squirming lushness of the body but / to point to the ground behind me.” And as Božičević reveals the ground with its “uproar of leaves” in glimpses, through the wound her words have made, we get a sense of what we might rise towards—with whom, and how—and what we might have to leave behind. (March 2013)

Purchase Rise In The Fall HERE.