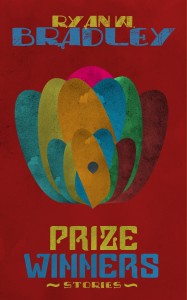 Ryan Bradley’s fiction collection Prize Winners is a grab bag of funny sexy, sexy scary, sexy creepy, sexy sexy, and sexy hey now. It’s a sexy grab bag, that’s for sure. For example, Tom Selleck’s mustache (the epitome of sexy back in the day) gets some great stage time in the opening story Goodbye Ruby:

“Ruby had a crush on Tom Selleck’s mustache. Her locker was wallpapered with magazine pictures of him and it just about killed her when he shaved it to play Eisenhower. “For a goddamn TV movie,” she said when I asked if she wanted to watch it at my place. “A goddamn TV movie” over and over, and I could hear her throwing pillows and blankets around her room, like a self-contained hurricane.
Father Shannon gave me ten Hail Mary’s for inviting her over when my parents weren’t home, on top of the thirty for impure thoughts.”

The protagonists in Prize Winners are often explorers, of themselves, of those near to them. The protag of Pubes is an explorer of that which is closest to him—his nutsack, specifically—and he decides to explore it with clippers. This falls under the aforementioned “sexy hey now” category. It’s an extremely tense story, and as I went along I could feel myself bracing for impact:

“The upper pubes were now all but gone, Donnie was using the smallest attachment for the razor, the one he had used to shave his head, back before he gave that up after being called a neo-Nazi one too many times. He started to work the sides, and slowly toward the balls, still holding his boner, feeling it pulse wildly in his grip.”

I’m convinced, thoroughly, that Ryan Bradley can write about pretty much anything and maintain the high level of smoothness he establishes early on in his stories. Whether touching on the humorous, the sexy, the humorously sexy, or the humorously sexy with a dose of dark realism, like here in Wishes And Blow Jobs—

“She got on her knees and started to work. The fries were getting cold, so I shoved four or five in my mouth at a time. The skin of her forehead, her hair, looked greasier than the potatoes. I wanted to put my mouth on her. To soak out the grease with my lips and tongue. I put my hand on her head.
‘Don’t touch me,’ she said, but all gobbed up, because I was still in her mouth.
When I got home my check was in the mail. They’d stiffed me, but it was enough to last me
another week, so there was no sense in complaining. I walked to the bar and asked the bartender to cash it.”

—Bradley’s writing is consistently inviting, which is a great thing. It’s also the thing that makes it dangerous, oh yes, like asking a handsome stranger into your house and then having that stranger turn out to be a vampire.

The stories in Prize Winners are a pleasure to read despite their raunchiness or maybe because of their raunchiness because it’s well written raunch, so this collection certainly deserves the attention of your soft, vulnerable eyeballs. Fear not the sexy grab bag. Plunge your hand inside and see what your fist pulls out. (2011)