Review of Rae Bryant's The Indefinite State of Imaginary Morals 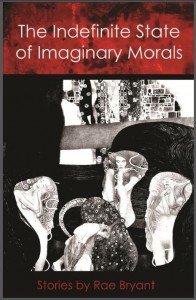 If I had to describe Rae Bryant’s collection The Indefinite State of Imaginary Morals in two words, the words would be these: damn impressive.

And it’s damn impressive for a number of reasons, not the least of which is the variety of texts presented. We’re given flash fiction, microfiction, short stories, and a play even. In the middle of the collection we’re given Klimt Redux: A Study in Desecration, which acts as a kind of street art on the printed page. Bryant presses her pen to Klimt’s images to create art atop art, and the result is sometimes thoughtful, sometimes jarring, and sometimes humorous. In An Old Woman’s Morning after a One Night Stand, Bryant includes a comic bubble that reads, “He was so much cuter with his dentures in…”

These spots of humor are very welcome in a collection bursting with strong and often beautiful writing that lingers on themes of insecurity, power, and the perceived trappings of domesticity. The bulk of the protagonists in this collection are women, and Bryant wastes no time in flipping the script, so to speak. The opening stories present women playing the roles often assigned to men. In The Indefinite State of Imaginary Morals, Relatives and Gin, the main character escapes from a shallow post-coital encounter by crawling toward the door on all fours, and once she reaches the safety of a 7-Eleven, she muses on which relative she’ll kill should the man call.

In Intolerable Impositions, the main character’s arm is pinned beneath the neck of a slumbering lover, and her only course of action for escape is to gnaw her own arm off. It’s funny and shocking, and it’s here that a great strength of Bryant’s writing is revealed. She has the ability to weave, seamlessly, in and out of fantasy. To witness it is truly jaw-dropping, and this weaving is presented best, I think, in Sublimity in Turquoise Blue, a longer, though brilliantly segmented story about an artist drowning in Mexico.

Pg. 60: “Just off in the distance, beneath the water, I see two figures playing and laughing on the ocean floor, just as they were on the beach before I swam out. Two figures—boy and girl. They are playing in the sand, and I know who they are, even before I can see their faces, hidden beneath blue and pink sombreros. They are as familiar to me as my own skin. Giggles erupt from under the wide hats.”

Bryant’s writing is patient and controlled as she dunks our heads beneath the surface, subtly at first as she warms us up for longer submersions. In this way she earns our trust and rightfully so, because the things she shows us are gorgeous, but they’re dark, too, as well as painfully honest. The stories in this collection carry the weight of crumbling relationships, and the reality that people are ugly, needy, and sometimes smelly. They also carry the weight of our tendency as a culture to objectify women, notably in Fly Fishing in Neoprene Legs where it’s intimated that catching a woman is akin to catching a fish, or in the eerily futuristic or eerily contemporary Collecting Calliope where a father and son choose “built” women to satisfy their needs, or to fulfill an assumed rite of passage. The latter story is a satirical rendering of human trafficking, of women forced to perform in a male-dominated society.

To me, the true standout story in this collection arrives somewhat early on. In Monk Man and Moonshine, a lengthy story about a young girl’s trials growing up in the Appalachian back-country, Bryant flexes every muscle in her creative arsenal. She squeezes character, scene, and setting to perfection.

Pg. 43: “Fireflies lit within inches of each other now and the girl put her honeysuckle blooms carefully in her jean pocket then took a Mason jar sitting against the hooch. She tip-toed round back, stopping every few steps like a statue in a sculpture game she played at Bible School. A glow lighted in a slow fade pattern. She held her palms close together, not quite touching and in one quick movement, she surrounded the firefly. It’s wings flitted against her fingers and palms and she peeked between her thumbs to watch it glow, remembering a silly rhyme Billy Barnhart had told her after Sunday School four weeks ago when she agreed to walk down by the creek with him.”

Overall, this collection is damn impressive as a showcase of Bryant’s skill as a writer, and it’s also a damn good read. (2011)