Review of Noah Gershman's THE ENTHUSIAST 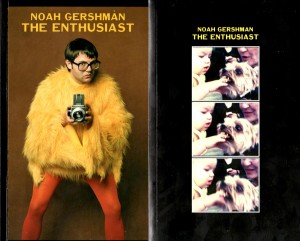 Noah Gershman’s poetry collection The Enthusiast comes with two sides, and I don’t mean Asian coleslaw and potato wedges. No, The Enthusiast comes with a Side 1 and a Side 2, kind of like a mix tape but not because it’s a book, you dig? So from a production standpoint this book is great fun straight off. It comes with a requisite inversion because once you’re done with Side 1 you have to literally flip the badboy over and begin at the second cover to get through Side 2. It’s like the two sides are eating their way through the pages to get to the gooey center of the book, which brings us to the text itself. And guess what? It’s really, really fun.

Gershman views the world through a quirky little lens, spinning and stretching ordinary situations, longings, and dreams into fantastical shapes that are at once foreign and familiar. Take, for example, the opening lines of The Basics in which he offers some practical advice:

“Never argue with a skeleton.
There’s always something you have
that he wants…”

Or The Tarrytown Lifters, a humorous poem under laced with some great sentiments of responsibility and the dreams of toiling men:

“Whatever it was
they could lift it:
bantam chickens,
the uncollected memory of toads, fog
like smoke from fires, lift and load it
into the compartment
of a sturdy yellow truck.
The pay was low,
but they had wives and bills and plans.”

Some of my favorite bits included extravagant creatures like these mentioned at the close of The Ambassador’s Freckle:

Or the men lingering on the sidewalk in Two Giants:

“…So tall,
they bent over a 2nd floor window
for the person behind it
to light their cigars.
They looked almost civilized
in their khaki slacks and sportcoats…”

In the latter work there’s a great sense of real-life guilt and fear behind the thunderous imagery. It’s a fine showcase of Gershman’s skill on the poetic tightrope; man’s got some solid balance and nimble feet.

Near the mid-point of Side 2 comes a piece that I felt really distilled the essence of the entire collection. It lumps together a rag-tag group of “cutthroats, buttheads, slumlords, buzzkills, murderers, burglars, scumbags, chumps, scoundrels, lunatics,” etc., and places them in what could be considered a sterile, normal setting otherwise known as Brunch. The result is warm and funny, and it reminds us that those who exist on the fringe are still very much human.

The title piece comes at the very end of the collection and speaks of an unbridled, incendiary enthusiasm:

“He loved everything
with unfathomable zeal.
His attitude made some uneasy
and he was warned
to play it cool…”

Like Brunch, the poem The Enthusiast is a contagious, effervescent little microcosm worth revisiting as soon as your eyes meet the bottom of the page. Do yourself a favor, though, and flip the book over and start reading Side 1 again first. It’ll make you grin all over again. (2011)