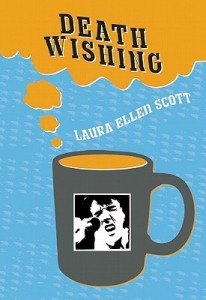 In Laura Ellen Scott’s smart and quirky debut novel Death Wishing, the last muttered desires of some, though not all, are coming to pass. Cats are wished away along with cancer, Elvis comes back from the dead (young Elvis, thankfully) and orange clouds fill the sky. Set in the steamy streets of post-Katrina New Orleans, the story centers around a father and son, Vic and Val, as they vie for the affections of a neighbor and struggle to adapt to the precariousness of the world in which they live. Vic, the father, passes his days at a fabric shop—and with his longtime friend Martine—while Val slides in and out of frame as he focuses on exploiting the fishing industry now that an odd and delicious Buttercrab has shown up in the local waters. Murder is also on the rise as street thugs and cults attempt to kill wishes out of people or snuff their wishes altogether. The problem is that nothing is guaranteed, seeing as not everyone who expires has their dying wish granted, and soon the murders lessen—until a list of “Wishers” surfaces giving the criminal underbelly of the city a more focused direction. The writing is fun and addictive, and Scott has a real handle on honest character reaction when they’re presented with the bizarre. Everyone quickly adapts when mothers sprout third eyes at the back of their necks, just as café owners and patrons make expeditious adjustments when coffee cups begin to refill themselves. Scott understands the human need to assimilate certain “smaller” changes—it’s the reason most people don’t leave Facebook—and it lends a kind of real-world credibility to the fantastical nature of the story. Clever, entertaining, and thoughtful, Death Wishing is sure to satisfy readers who like their literature stripped of pretention and draped instead with the cape of The King. Uh-huh. (October 2011)