Review of Edward Mullany's IF I FALTER AT THE GALLOWS 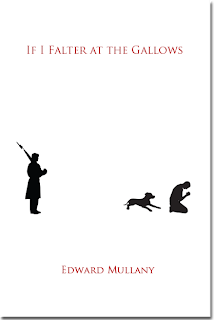 I read Edward Mullany’s phenomenal collection while sitting alone at the Laundromat. I sipped a strong cup of coffee as I watched my pants, socks, briefs, and so on flop and tick in steady circles. I picked up Mullany’s book, read a piece, put it down, pondered, repeated. When I finished, I felt clean and fresh, and also inspired.

The Not So Simple Truth

Potatoes. Dirt and
water. And a soft
towel left for us while
we shower. These
things are no
truer for their
plainness than peas
or pus or leprosy.

Comprised of concise poems, mostly, and a few blocks of prosetry/verse fiction, Mullany’s debut collection is an absolute stunner. He moves effortlessly from heartfelt to whimsical to surprising to shocking to serious to humorous, and he does so with simple, straightforward action and imagery. Edward’s words are as honest and warm as a pair of socks right from the dryer, and they’re just as pleasant to handle.

At the top
of a dune
in the desert,
a bearded
man appears, only
to be pushed
in the back
and caused
to tumble down
the dune by
another bearded
man.

Edward creates strings that are paradoxically foreign and familiar. Within the pieces, and sometimes behind them, there exists the presence of violence or the potential for it—the brilliant textual reworking of American Gothic shows a family filled with gun lust—and Edward’s creations are interested in the study of this violence, this bubbling, primal need that roils at humanity’s core. To me, the pieces marvel, right along with us, at that which they contain. It’s a paradox, again, by way of navel gazing through to an innate depiction of what it means to bear witness. In simpler terms, perhaps, it’s life looking at life looking at life, endlessly.

We forget in which zoos foolish
humans cause their
own mauling. A philosopher sticks
his head into the fire, so
what? Here is an earth. Here is another
earth. Here is another earth.
Once our eyes slip from the page, these pieces continue on for miles and miles, through lives and deaths. They’re filled, each of them, with an odd, grinning infinity, and with the booming magnificence of change.

A Suicide In The Family

The doorbell rings. Or a mountain
speaks to a mountain
in a language only
mountains understand.

This book has fast become a favorite of mine because it isn’t simply for poets or fiction writers or mothers or shaggy sons left alone to watch clothes at a Laundromat—nay!—this book is for everyone because it’s accessible to everyone, and there’s no doubt in my mind that anyone who reads this collection will find in it something familiar to them, something that rings of home, and of something much larger than themselves.

Edward Mullany’s If I Falter at the Gallows is an embrace, pressing lightly the shoulders of the cosmos. I recommend this book so highly I’m in danger of falling off the ladder. (October, 2011)

Purchase If I Falter at the Gallows HERE.