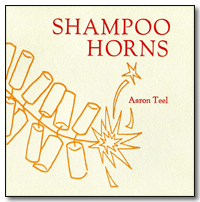 I was a little perplexed by the title Shampoo Horns, a little worried this was going to be a post-modern collection that I couldn’t connect with.  But I had to pick up a chapbook this beautiful.  And in the first pages, when I discovered that the title refers to the horns made out of shampooed hair in the bathtub, I had already realized this was a peopled book.  These connected stories are told with so much violence, despair, and hope, and the characters can’t be ignored.

The shorts in Shampoo Horns are told by Cherry Tree, a man reflecting on one redheaded, childhood summer in his Texas trailer park.  The stories aren’t linear; instead, Teel circles around a tornado we’re told about in the first short.  Time is marked by the tornado, and it is present in every story.  While we’re drawn into Cherry’s relationships, mischief, amazement, and hurt, we’re still waiting for the tornado.  And before we see it, one short finally tells us its sad significance, a loss larger and realer for Cherry than any monetary loss.  And finally, a short gives us the winds and the residents hunkered down in a ditch, the tornado carrying with it the stories of that summer.

Teel writes with an honesty about class and childhood here.  He is not drawing our attention to a lower class childhood so we can say, “Isn’t it just so sad.”  While Cherry’s best friend Tater is mostly neglected by his alcoholic mother, while in his trailer, “Plates of half-eaten food were scattered around the room amid piles of dirty laundry,” so much attention is drawn to the wonder and the curiosity of every childhood summer.  This vividness makes the reader react physically.  Sometimes, it’s the treasure in Cherry Tree’s world: a menagerie of stone statues he’s not allowed to touch, the abandoned trailer that becomes a hideout for Cherry and his stepbrother, and the “two brown girls in too-big t-shirts and white roller skates with white laces” who “spin in circles around [him] every night.”  Sometimes it’s the crushing weight of growing up: the game “Gas Pedal” in which his stepbrother “holds [his] ankles and crushes [his] balls with his feet,” June bug wings shoved down Cherry’s throat, a first puke after a first drunk on Shiner.

Cherry’s childhood is one most of us haven’t experienced, but it’s still the childhood we all had.  We may not know what it is to grow up in a trailer but we know what it is to grow up.  To be twelve years old and still see a mother as an angel, a magnet, but starting to feel the new pull of the opposite sex.  To discover sex strangely through magazine, rumor, and window (and on occasion by finding a sex toy in the bottom of a pool).  To approach this new discovery of the opposite sex more sweetly—“When she leaned over me, a cross on a chain slipped free from her shirt and I touched it with my tongue.  I thought wildly that Dad, sunburned and tired with his baseball and beer, had never done anything like that.”

We know what it is to attach so firmly to someone older or cooler, even if that someone treats us like shit.  We know the emotional equivalent of someone who will share his hidden treasures in a bunkbed fort with us one day, leave us for dead the next.  We know what it is to betray the person closest to us just to be on the side of cool.  And once we learn what the tornado and his stepbrother have taken from him, we understand why Cherry Tree would act with so much venom (in an event that is making me squirm right now as I type this) toward his best friend.

We sometimes treat the sloping emotions of adolescents as if they are only the product of puberty. In Shampoo Horns, Aaron Teel reminds how rooted and real these feelings are, and how they continue to shape us today. (August, 2012)