Review of Jensen Beach's FOR OUT OF THE HEART PROCEED 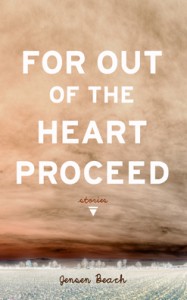 Jensen Beach’s masterful debut collection is largely about familial bonds, in particular the bond between fathers and sons. The book is carved into three sections, and the opening story Training Exercise sets an eerie and wonderful tone as a father and son meet a strange man at the border of their lawn and the tree line. “It’s late. Not too late, not even fully dark yet, but still it’s definitely late enough for it to seem odd for a man to be hanging around the woods in my backyard. My son shines his flashlight on him.” Beach’s stories center on themes such as love and change, though the overriding themes are fragility, in terms of one’s existence, and sacrifice. In The Dark is What, a father and son peruse a flea market where they encounter two men watching an X-rated movie. “A pornographic film was playing. The man who was not smoking turned slightly toward the television and leaned into it like he was protecting it from us. A giant chandelier of a scrotum filled the screen. My son said, ‘What is that?’” Here, and earlier in the story, Beach’s narrator uses the opportunity to teach (and also to misdirect, though in a humorous, paternal way), and the reader can’t help but marvel at how the grittiness of the scene is made pink with the boy’s innocence. Beach has an uncanny ability to soften the darkness with his writing, to dull the sharp edges of something as austere as death while perfectly preserving its sadness. In Priest Lake, Idaho, a man copes with the loss of his wife: “His wife enjoyed camping at Priest Lake in Idaho, and, if the man says it often enough, she does now too. She enjoys it. She exists in this enjoyment.” Throughout, the stories are consistently smart as they explore the evils of the world lurking everywhere—in the shadows, our words, emotions—though, perhaps, the stories are less about the evils of the world and more about the inevitable changes that the world throws onto us or into us; they’re about the fear of the unknown, or the ripples from the changes that occur in life. Parenthood is another major focus in this collection, the sacrifices that come with it, the feelings of being trapped, longing for escape. Beach’s stories strive to recognize why those sacrifices and longings, as byproducts of past choices, are awesome and beautiful. These stories are about the pain of being alive, the requisite hurt that often comes with understanding. The titular For Out of the Heart Proceed is the closing piece of the collection, and it’s lengthier than many of the previous stories. It’s another father and son story—another welcome father and son story, the dynamic here never grows old—in which the father must surrender his son over to his ex and her new beau. It’s spare, funny, and exquisitely tense and surprising. Beach knows how to zero in on the pulse of a story (and the pulse of the reader). Surgical though never sterile, his constructs press into the skin of our wrists just so that the words rise and fall with each blood-thump. This is truly a thrilling and immensely enjoyable debut collection from an author who is going nowhere but up. (May, 2012)

Purchase For Out of the Heart Proceed HERE.